Tis course is offered within the context of the IMPRS BeSmart Summerschool.

During synchronous teaching we will use RStudio and the software mentioned below.

Objectives
R is a powerful statistical programming language. The course should enable participants understand the basic structure of this language.
Handout 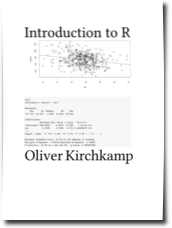 Topics:
Software
For our practical examples (during the entire course) we will use the software environment R. I think that it is helpful to coordinate on one environment and R has the advantage of being free and rather powerful.

Please send your answers to the following questions as an email to oliver@kirchkamp.de. Don’t attach any files to your email.

Install R and RStudio. Also install the package Ecdat from within RStudio. The command

gives you a list of the datasets that are provided by the package Ecdat.

Can you find a dataset whose name starts with the same letter as your last name and which contains at least one variable that is a number? If there is no matching dataset, find one with the next letter in the alphabet. After the letter Z, continue with the letter A.

Now find a dataset that matches your first name and that includes at least one variable that is a number.

Find again a dataset that matches your first name and that includes at least two variables that are numbers.

In your answer, only include the commands, not the graph!

Find a dataset that matches your last name and that includes at least one variables that is a number, and a second variable that has fewer than 12 different values. I will call these (less than 12) values “cases”.